Partly reminded to do this by recent FB posts by Graham Hutton and Andy Gill, I used foils and OHP pens to deliver my last lecture in the functional programming course "live". I like the sense of tension you get from writing stuff "out there" and interacting with the class in a more thoroughgoing way than seems to happen with pre-prepared slides.

What did I cover? The aim was to hammer home the message about the data driving the programming, and I took the example of processing arithmetical expressions, writing an evaluator, a virtual machine and a compiler … I didn't cover parsing, but that can come in the second half of the course: Stefan?

So, we started with a data type for expressions, with literals, +, - and *.

The first thing to define is the evaluator, which has a straightforward data-directed definition:


What sort of machine should we use to evaluate the expressions? The simplest approach is to build a stack machine, which can either push literals, or apply an operation to the top elements on the stack (from my slides): 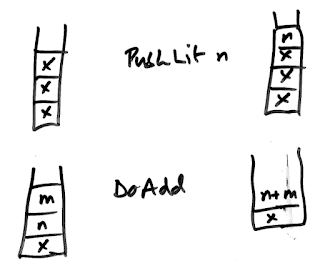 Here's the type of code.

We can describe this machine by giving the function that runs a program, when we represent the stack by a list of integers, and the program by a list of code.


An alternative here would be to give the oneStep function, and then to define run in terms of that: that's an exercise for the reader.

The final piece of the puzzle is to define the compiler:


So, a very enjoyable last lecture on Haskell.