The Erlang mini-MOOC pilot … what have we learned?

We’ve learned some things from our pilot MOOC: some is surprising and some more predictable. The main places we’ll need to work harder are how we give feedback on homeworks, and how in general how we engage participants … more about both of those below.

We’ll also do some more detailed reflection on the quantitative data that we’ve gathered, but that’s for another post when we’ve had time to analyse it, and also given time to those who are still working hard on the pilot to finish up.

So, in no particular order, here is what we have found out from the experience of planning, producing and running the pilot, which is part of the K-MOOCs project at Kent. 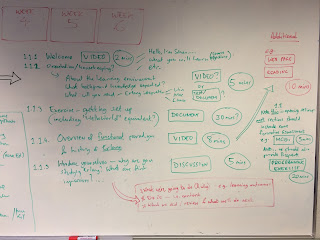 One key thing we learned from Mike McCracken – who has led Georgia Tech’s online activities, including a full online MSc in computer science – is how important it is to plan. Mike's advice was to plan each activity in enough detail so that once we started in production, all that we needed was to make the video, write the quiz, or whatever.

Here’s some of the planning in progress: you can see that we’ve got three levels: weeks 1 to 3, sections within each week (typically 3 or 4), and sub-sections, which can be anything up to 8.

Planning takes you longer than you expect …  but it saves time later. 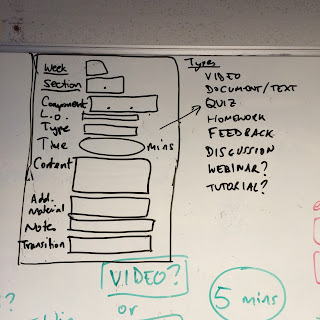 Mark O'Connor – the learning technologist and project manager for the K-MOOCs project was also clear about the importance of planning, and he helped us to refine things into a template for describing each activity.

This took about two weeks; that’s a lot longer than I’d expected, given that much of the material was already written for an undergrad course at Kent on functional and concurrent programming. However, the actual production took less time than we’d anticipated, and this was down to the value of doing all that planning in advance, so it paid off. Thanks Mike and Mark 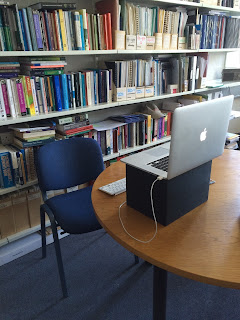 We recorded the three Erlang Master Classes using a serious – I guess semi-professional – studio, and having them filmed and post-produced by KERSH media to a very high standard. My master class was part of the pilot, and all three will be part of the full MOOC, but our budget didn’t stretch to making all the videos in a studio.

Instead, we used my office and MacBook Pro … pictured right. The box makes sure that the camera angle is right, and the external keyboard means that you can’t hear all the keystrokes during “live coding” sessions. Apart from making sure that no-one could come in and disturb the session, my mobile was switched off and phone unplugged from the wall, no special preparation needed. Once I got into my stride, most of the lectures were done in a single take, with Mark providing some post-recording cutting, in case I’d had to start again, or paused for too long.

The preliminary feedback seems to suggest that this lo-fi approach is “good enough” for the lectures, which after all are concentrating on getting ideas across effectively, and not aiming to be eye candy. 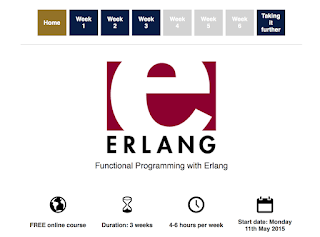 Getting it right was a matter of teamwork. Mark O’Connor played an invaluable role in project admin in general but more importantly in building the web presence for the MOOC. We were using our own “external” moodle setup, rather than a specific MOOC platform, and Mark was able to give that a look and feel consistent with what we hope people were expecting.

Stephen Adams – who is doing a PhD at Kent on refactoring Haskell programs – was TA for the course, and separating that role from that of the lecturer seemed to work fine. He had clear responsibilities for supporting the forums and so forth when the course was running, whereas my role was to get the pedagogy and content right in advance.

The platform was “good enough” 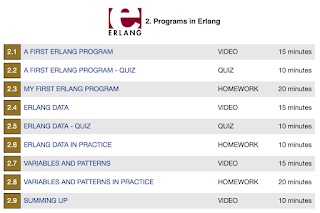 So we were using Moodle rather than a dedicated MOOC platform, and this had some disadvantages.

Dedicated platforms will provide some services, such as transcription of lectures, which we were unable to provide in the pilot. We’ll have to find a way of dealing with this if we don’t move up to using a MOOC platform, and indeed we’ll have to be more aware about questions of accessibility in general.

We also struggled with how to keep participants up to date with changes that are taking place. This is tricky because we decided early on to have a separate discussion forum for each activity: we wanted to do this because we knew that people would want to go through the materials at different rates, and so at any particular time each individual’s interest could potentially be on smoothing different, so we had to group according to topic, rather than just use time. Ideally we’d like to use some sort of feedback dashboard, but in conversation I’ve heard it said that none of the platforms has got a complete answer to this, most likely because it’s a tricky problem.

Moodle performed better than standard platforms in some ways. At Kent we use Panopto to power our lecture recording platform (which we used for post production for the MOOC). This allows users to view the media – e.g. slides, screen capture, webcam video – separately, and, for instance, to index into the presentations by means of the slides. This extends what most MOOC providers do as standard. 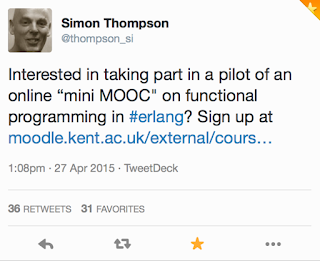 We’d originally aimed to have fifty to a hundred participants for the pilot. These came from both CS students at Kent and externally. At Kent we offered the course as revision for second year students who had already learned Erlang and as a taster for those who’ll take the Erlang course next year. I’d also recruited some potential participants at the Erlang Factory in San Francisco in March.

Mark we keen for us to be more ambitious, and so I tweeted an invitation, hash-tagged #erlang. We got enough retweets from key Erlang players that this brought us up to our 500 cap relatively quickly – a pleasing result, not least because it cost us nothing for advertising. 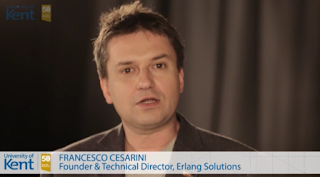 We wanted to make the best use that we could of our limited budget, so we made sure that we could use what we did in three different, but interlinked, ways. 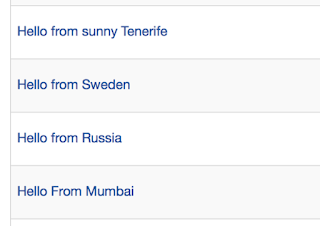 We used forums for discussion, one par activity, but also added a general FAQ for some of the questions that came up as well as a “common room” for general discussion that cut across individual activities. We also used a forum as the place we started to try to form an online community, through people introducing themselves to the group.

Although we did have discussions, particularly about the homeworks, we’d have liked to promote more, and one idea we’ll definitely explore next time is to find ways of pairing up people to help each other out. Our plan is to do this dynamically, so that two people who hand in a solution to a homework at about the same time will be asked to comment on each others’ work. We hope that this will make it easier for everyone to see how to contribute, and also how they will be gaining benefit themselves from the process.

Finally, we could also pro-actively form groups to work on later, larger, exercises (maybe supported with some collaborative editing software) but again this group formation will need to be dynamic to reflect the different ways that individuals use the materials. 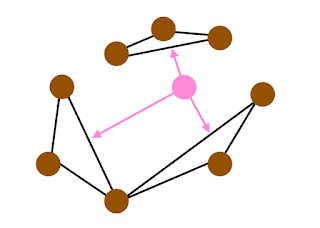 Some years ago, Kent and Erlang Solutions Ltd worked together on an e-learning project hosted in moodle, key investigator Roberto Aloi. This project developed a feedback plugin for moodle to give testing and style feedback on Erlang programs, and we hope with ESL to re-develop this to fit with more modern technology (such as docker and REST).


We were happy with the pilot. It showed us that we could deliver a mini-MOOC using available resources and reasonable amounts of time. It also showed us where to put our effort next, principally in two areas: promoting the best engagement possible from participants, and delivering to them the best feedback that we can, at the time when it is most valuable to them. We hope to move things forward over the summer, and to present a full MOOC later this year or early next. We’ll also follow this blog post with another containing more details about the feedback from the participants in the pilot.