Transformed by You (updated)

I spent Saturday in Tunbridge Wells Town Hall with three of our first year students and a whole lot of other participants at the Transformed by You event. The idea of the event was to bring together people interested in building computer systems - often apps - that will have a positive effect on the community. Specifically they should do on of three things 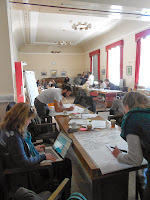 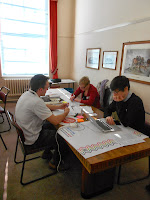 So, what was it like? Our students – Ed Wellbrook, Viorel Tudose and Panayiotis Christofides – had gone along with ideas for

During the day they worked on presentations of their ideas, in collaboration and comments from other attendees. This gave them useful feedback on their ideas, and helped to focus what they were aiming to do; they also gained experience of building quick prototypes (result: it's not as quick as you would hope … ).

I was also able to spend some time with one of the other projects, ThinkHealth from Gravesham NHS Trust, which was one of the winners of the day. Interesting there to see how an internal NHS project for promoting health among staff might well be rolled out to companies as part of their occupational health schemes.

Finally, we had the archetypical hacker lunch, coke and Pizza from Dominio's – a first for me: I didn't really take to the barbecue sauce instead of tomato on some of the bases :-S

On the following Thursday, Noel visited Kent to watch the one minute videos made by our students. Here are our CO334 tutors – Keith, Dan and Minas – watching them too, complete with popcorn: 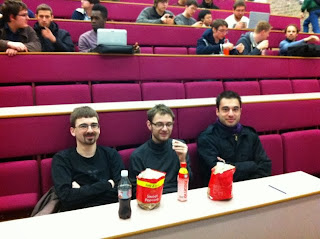 He also revealed winners among the students, who took all three prizes in the ideas section of the competition organised by public sector organisation Kent Connects.

Carol Patrick, Kent Connects' Head of ICT Partnerships, said: "We were really impressed by the quantity and quality of ideas sent in by people wanting to find ways to improve their local community and we're now looking forward to these ideas and prototypes becoming a reality."